A new career late in life has brought a bounty of extraordinary fresh oranges to eager consumers, Liu Zhihua reports.

On Benlai.com, China's top online food retailer, the most coveted fruits in autumn and winter are what people call the "Chu orange".

Last year, 1,500 tons of Chu oranges were sold on the website, the official online retailer of the fruits.

This year, since preselling began on Sept 15, more than 960 tons have been sold to date, although the oranges will not be harvested until early November, the online retailer tells China Daily.

Sales of the fruit this year are expected to reach at least 3,000 tons. They are priced at 148 yuan ($23) or 158 yuan per 5-kilogram box, according to Yu Huafeng, the founder of the platform.

The "Chu orange" gets its name from the orchard owner Chu Shijian, although its original brand name was "Yun Guan", literally Yunnan champion. Yu says Chu's life story distinguishes him from other Chinese entrepreneurs and makes him a model for young people who also live a dream.

Born in 1928 in Yuxi city, Yunnan province, Chu became director of the Yuxi Tobacco Company at the age of 51. He led the near-bankrupt company to become China's most profitable State-owned tobacco company, the Hongta Tobacco Group, in the 1980s and 1990s.

He was then widely respected as the "tobacco king" in China, until he was arrested on charges of corruption and sentenced to life in prison in early 1999. Later, the sentence was commuted to 17 years.

At the age of 74, Chu built the orange orchard with his wife, Ma Jinfen, who is five years younger than he is, after he was released on medical parole in 2002.

With their life savings and borrowed money, they contracted 160 hectares of land from a bankrupt orange orchard in Xinping county, Xuyi, to grow what Chinese call the bingtang orange (literally sweet and candy orange).

They chose the species because Chu once had some bingtang oranges in prison, and the distinctive taste and texture lingered in his memory, his wife says. Compared with the sweet orange (Citrus sinensis 'Osbeck'), the bingtang oranges he had were small, but had thinner peel, more juice, less pulp and stronger flavor, Ma explains.

They were confident they could cultivate sweeter and less sour bingtang oranges in Yunnan, where the climate and terroir are particularly suitable for oranges, thanks to plentiful sunlight, appropriate day and night temperatures, spring water for irrigation, and soft soil that stimulates roots to grow, Chu says.

It was hard at first: The bingtang orange was not as popular as the sweet orange in China at that time, and there were few books on how to grow it.

In fact, their orchard had previously been used to produce bingtang oranges, but a majority of the trees had died because of pest damage.

The Chinese don't like lots of sourness in fruits, Chu adds, so it was a tough challenge to balance the sweetness and sourness.

Eventually Chu's orchard crew refined their growing procedures to maximize taste and yield, and began to produce, on a large scale, fruits that were sweet and juicy fruits with the lowest pulp level, thinnest peel, and just enough tartness.

By 2010, Yun Guan oranges were already very popular in Kunming, the capital city of Yunnan, and in 2012 Chu's creation attracted the attention of Benlai.com.

The website launched a campaign to promote the oranges, highlighting the ups and downs of Chu's life, and instantly, consumers flooded to the website to buy the fruits. About 20 tons were sold out in less than four days.

Now the orchard has expanded to more than 5,000 hectares, with about 2,500 hectares now mature enough to bear fruits. To take care of the orange trees, the orchard hires about 200 farmer couples, who earn more than 100,000 yuan a year, according to Ma. 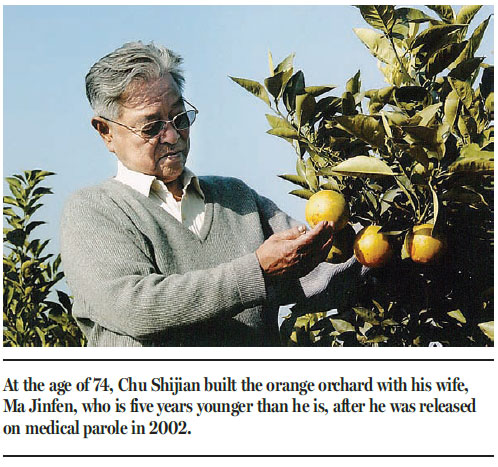